This meager HyperCard stack is my overdue submission for the Merveilles Hyperjam.

They say the nineties were an era of terrible management and leadership at Apple.

Distracted from their goals by Microsoft's betrayal, and the ensuing courtroom drama; desperately seeking an exit from an operating system designed for an underpowered machine from over a decade previous; lacking direction, vision, identity. Most Macintosh nostalgics avoid this period in the platform's history.

But there is a good reason to revisit this time period: the Mac users at the time were the most devoted, blindly allegiant dreamers the platform ever had. It was in the midst of Apple's darkest hours that their users were most passionate about the Macintosh, its strengths, its weaknesses, its past, its future.

And when CEO after bumbling CEO tried to paint them a picture of a more coherent computing landscape with buzzwords and empty promises, those users threw all their chips in.

This is a commemoration of those die-hard Mac lovers who had every reason to abandon the platform, but didn't; whose optimism was only possible in the face of the absurd. We all know where those lost years led, and while it's arguably healthier than it ever was, today's Apple can never capture the imagination like they did when they were struggling to stay afloat.

Let's imagine, for a moment, that they're still the directionless, incompetent underdogs we fell in love with all those years ago.

Here's to the crazy ones!

Many thanks to my Merveilles compatriots— this was a great idea, and my first real jam of any type I think! I'm looking forward to trying everyone's submissions.

Kudos to Gáspár Körtesi for your Atkinson dithering utility.

And here's a shoutout to hypercard.org, a website all about HyperCard that I haven't taken a close look at yet, but is clearly the work of passionate people.

You'll want to load this DSK file into Mini vMac, Basilisk or Sheepshaver. 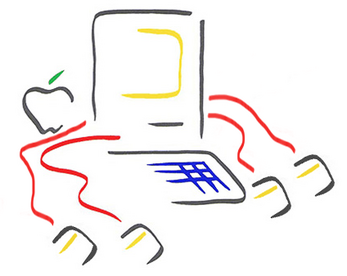